Media Analysis of Summer Drowning in Australia
Back 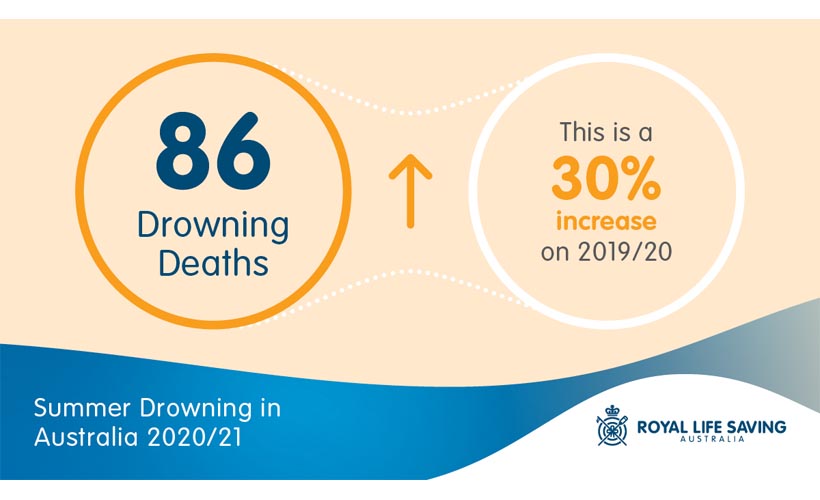 Last Summer, 86 people lost their lives to drowning in Australia. Each death left families and communities devastated. Drowning over Summer 2020/21 increased by 30% compared to the previous Summer (2019/20).

Following a challenging year for all Australians, people were looking forward to spending time outdoors by the water with family and friends. Unfortunately, some of these trips ended in tragedy.

Males accounted for 80% of deaths, a consistent trend when compared to long term drowning statistics. The largest number of deaths occurred among people aged 35-64 years (40%).

COVID-19 restrictions saw the closure of public swimming pools around the country. Many children missed months of swimming and water safety lessons, impacting their skill development and confidence in the water. Adults also missed out on popular recreation and exercise activities in the lead up to Summer.

With travel restrictions limiting movement, many Australians holidayed locally over the Summer break with drowning up in most States and Territories, including Queensland, Victoria and Western Australia. New South Wales recorded the largest number of deaths with 28 fatalities, followed by Queensland and Victoria with 20 deaths each.

Inland waterways accounted for 50% of drowning deaths in New South Wales and 100% of deaths in the Australian Capital Territory. South Australia, Tasmania and Western Australia recorded zero deaths among children aged 0-17 years over the Summer months.

Last Summer, more than a quarter of people nationally drowned while swimming and recreating (28%). A similar proportion got into difficulty while participating in an ‘other’ activity (27%). These deaths included incidents while fishing and rock fishing, jumping into water and attempting a rescue.

The Summer Drowning Toll is an important advocacy tool, providing timely and accurate information to policymakers, practitioners and journalists. Alongside other leading water safety organisations, Royal Life Saving will continue to raise awareness of drowning and share vital safety messages in the lead up to next Summer.

You can help by following these tips next time you visit your local waterway.